For those of you with older children, I’m going to give you the best mom tool that I’ve found – ever. It gets my kids moving, laughing and best of all accomplishing the task that I’ve assigned.

My suggestion is going to be a little shocking to some and I’m probably going to catch some flack for it. But, you know me, if it works, it works and sometimes a momma’s gotta do what’s she’s got to do in order to get stuff done.

Getting the kids to clean up their stuff (okay, I call it crap) around the house is a chore. It’s constant nagging and monitoring to make sure it actually gets done. It’s tiring and annoying because 2 of my 3 kids are old enough to know better.

Ready for the plan?

I told the kids they had 5 minutes to finish up whatever they were doing before we were going to pick up the family room. After 5 minutes, I gave each kid (all 3) a specific job to do. At the first eye roll, I grabbed the Nerf gun sitting on the nearby table and shot a dart at the eye-roller (ahem – missing on purpose). The immediate look of shock on their faces was priceless. 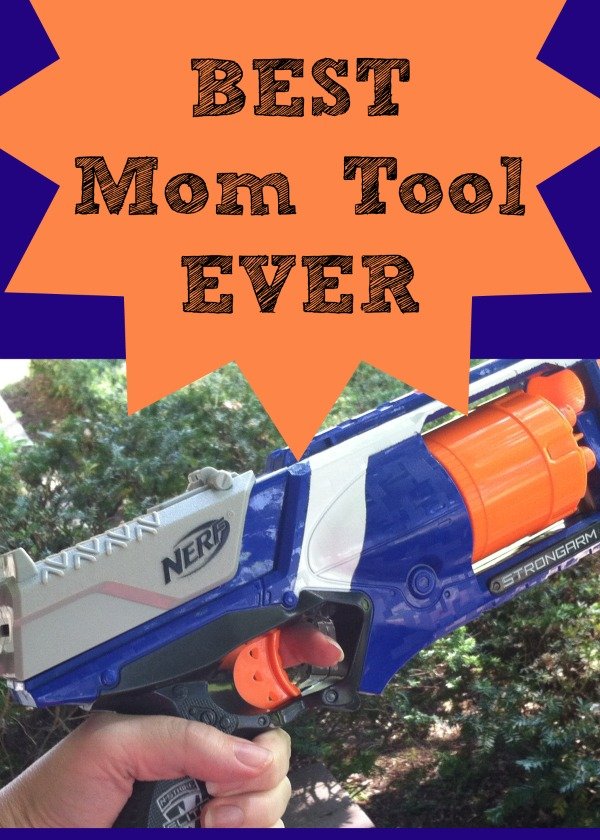 It got them moving. Cleaning was actually happening. When things started to slow down, or a child sat down thinking they were done, another dart was shot in their direction.  Sass? Another dart. And so on.

Giggles, running and cleaning is what happened next. Ahhhh… Just think about that for a minute….. I got my kids to not only clean up but they giggled while they accomplished it quickly.

Now, did a stray dart hit my 10 year old a few times (maybe accidentally on purpose)? Yes. Geez, if I missed every time, there would be no threat. Again, the shock value of actually hitting your target (ahem – or sassy 10 year old) is priceless. My family room was cleaned up in under 15 minutes!!! Whoo! Hoo!

Did a dart hit my 14 year old? Ha! Of course! She couldn’t contain her shock at my unconventional motherhood methods of threatening my children with a Nerf gun.

I really like this new tool, technique, method – whatever you want to call it. I think I’m going to use it again. Hmmmmm. My favorite idea came from my daughter (the 14 year old). She yelled “I know what I’m getting Mom for her birthday – a Nerf gun!” I think that would be a great idea – just remember the extra bullets, please!

Disclaimer – No 4 years old child was hit by the Nerf darts during this event. He may have giggled, screamed, ran around and cleaned toys. He may have even begged me to shoot him, but all bullets missed by a large distance (for real – on purpose).

What’s your best mom tool (technique, method, etc.) for getting kids to get moving on tasks you give them?

Giggles for the Day