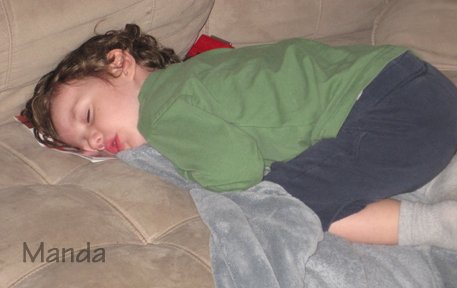 The other night I woke up hearing Baby E crying – kind of like a whimper cry. I was so tired and groggy. I had spent the last week being very sick and not getting any sleep. It was my first night actually sleeping. I tried to get up, but then he stopped. Ten minutes later, he started crying again and ran into the room. I scooped him up, hugged him and got him right under the cozy, flannel sheets.

As we cuddled, I asked him what was wrong. In his shaky voice, he told me a “dagger” was trying to eat him, his sister and me. I repeated “dagger” because I just didn’t understand. He told me “no mama, a dagger” – so I gave up. I told him that we were safe and it was only a dream. He wanted to know that his sister was okay too. I assured him that she was okay and that she was sleeping in her bed. He repeated “We are safe”. I confirmed.

Then, he practically passed out in my arms. We were snuggled up close and I could see his peaceful little face with the light coming through the window. I loved that moment.

But, you know, sometimes those moments are interrupted by those “I should be a responsible parent and put him back in his bed – because if I don’t, he’ll end up in my bed all the time” thoughts. So, I thought two more minutes and I’ll move him. Then, no, I want to cuddle my baby (I know he’s 1 week away from 3, but he’s my baby), so I soaked up all the time I wanted. I dozed off for a while and then decided it was time.

I moved him back to his room. He woke up on the way. He insisted that I lay in his bed. So, I did for a little while until his bed was all warmed back up and he was almost asleep. I kissed his forehead and gave him a hug. He said, “We are safe”. I confirmed again, “Yes, we are safe” and gave him another kiss. He slept through the rest of the night.

Interview with a Toddler