Remember back when I told you that we had been Ghosted?  Well, it was then our job to Ghost 2 neighbors. In the case that some of my neighbors were readers, I didn’t want to post our adventure until after Halloween. G and I sure had fun. We knew who we wanted go Ghost so we went shopping with them in mind. The first neighbor we ghosted was a family down the street that we see often. Our kids play together a lot. They had never been ghosted. G and I waited until it was dark outside and walked down the street. Their house was dark but we weren’t sure if someone was home. G very carefully put the bag of goodies between their storm door and front door. It had been really windy so we didn’t want anything to blow away. Success! Then, we proceeded back down our street to our next house. Drat! They already had a ghosted sign in their door. We then walked WAY down the street and noticed that many of or neighbors had already been ghosted. G decided that he wanted to ghost one of his classmates if they hadn’t been ghosted yet. When we got there, it appeared that they had not already been ghosted. There was a  problem though. All their lights were on. They had a big picture window at the front of the house and the curtains were wide open. G still wanted to Ghost them. So, I stayed back but out of the street light and G ran up their driveway and then ducked past the window. He dropped the bag close to their door and then ran as fast as he could back to me. We giggled the whole way back home. I hope we get ghosted next year! 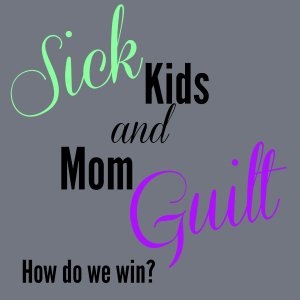 Sick Kids and Mom Guilt – How Do We Win?