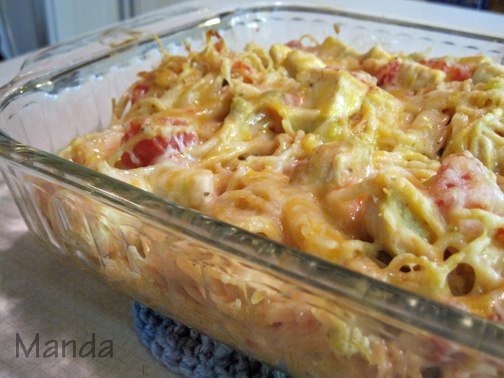 So, maybe you’ve recently read about my Pinterest addiction.  If so, you know that I’m pinning things all over.  I’m also trying to make some of the items that I’m pinning.  I have an ever growing board called Yummy.  Recently, I tried the Chicken Spaghetti.  It was wonderful.

My kids had a couple of friends over and asked if they could stay for dinner.  I said yes and I knew I had a winner recipe.  These kids (ok, all except for G) not only ate dinner but came back for seconds and thirds.  Baby E ate his serving and then begged for bites from my plate.

This wonderful dish on Pinterest linked to a post at Mandy’s Recipe Box.  You can go check it out and find even more great stuff to make.  The recipe is nice and easy too.  I love yummy simple dishes that can be whipped up in a flash.

Cook noodles according to package directions. Boil the chicken until done. Toss together in a large bowl. Add cream of chicken soup, green chiles, and tomatoes, and 2 c. cheese. Pour all into a 9×13 casserole dish. Top with 1 c. cheese. Bake at 350 degrees until bubbly.

I don’t normally modify a recipe until I’ve at least tried it once, but this time I used the ingredients I had on hand.  So, I used diced tomatoes with basil, garlic and oregano and it tasted great.  I did not have shredded cheddar on hand so I used a shredded mexican blend instead.  I also seasoned the chicken with a little salt and pepper before I boiled it in chicken broth (enough to cover the chicken breasts, more than 1 cup) with a little McCormick Grill Mates Montreal Chicken Seasoning.  I wasn’t sure if the chicken broth mentioned in the recipe was for cooking the chicken or for mixing with the other ingredients, so I assumed it was for cooking the chicken and did not add any later.

This is definitely a dish that will make our dinner rotation.  I hope you enjoy it as much as we did!