Saturday afternoon A and I held a Singer Sew Very Easy House Party. For those that don’t know, House Party is a company that works with other companies to help bring their products to the average buyer.  As a party host, you get a party box full of free stuff and coupons to share with party guests!

As a party host, I attended a sewing machine orientation class at my local JoAnn’s store and was able to check out the Singer Confidence Stylist machine.  It’s a beautiful machine that does everything you would need it to do.  I love all the features and stitches.  It really is so easy to use. We decorated using the Martha Stewart Crafts that were provided in our party box. Don’t they look great? We printed off some of the Singer Sew Very Easy logos and put them on some gift bags to hold all of the party swag. A really wanted to play some party games.  So we filled a baby food jar with bight colored buttons and gave a prize to the person who guessed closest number of buttons in the jar.  We also passed out 3 clothespins to each party guest and if they used the word “sewing” we took away a clothespin.  The last one left with a clothespin won a prize.  We gave away a half apron that we made earlier in the week, a reusable JoAnn shopping bag, and a starter sewing kit with some of the basic supplies. We made the suggested party project – an accessory roll up that you could use to hold sewing tools, makeup brushes, colored pencils, etc.  It was a great project and even a brand new sewer was able to complete it without any frustrations  🙂 We also made some reusable bags from old t-shirts.  A super easy project that was a Martha Stewart segment on the DVD included in our party box. Of course there was food!!  We made vanilla cupcakes with vanilla cream cheese icing, button cookies (although the inventor – Bakerella calls them Coraline cookies and I got the idea from a fellow party host on Twitter), Crostini and cheese, summer sausage and crackers. The cookies were yummy and none were left after the party!  They looked so great.  I think I like how they look with out the chocolate better, but they sure tasted great with chocolate.  I bet they would look really cute dunked in different colored chocolate – more like buttons maybe?

Well, I’m all partied out.  My house is clean – awesome and I had a great time with friends.  Thank you Singer and House Party!!! 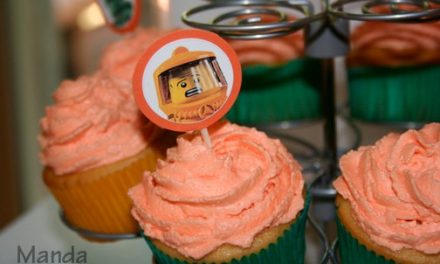