Another crock pot recipe from A Busy Mom’s Crock Pot Cooking Adventures and it didn’t disappoint!  So yummy and wonderful and a cold winter’s day!

Even G ate some!  He had to be strongly encouraged to try it.  He said he didn’t like it but he ate the small bowl of it that we gave him without complaining.  I think he just doesn’t like to be proved wrong!  LOL!

Add the first 11 ingredients to the Crock Pot, stir and cook on LOW for 6-7 hours.

Add the Worcestershire sauce, bacon bits and cheese and stir.  Warm up the milk and stir in the flour until smooth.  Add it to the Crock Pot and stir.  Cook on HIGH and additional 30-45 minutes.  Serve with a sprinkle of green onions.

Really, I don’t think there’s much to modify, it was so yummy!  My onion was the size of a softball (too large) and I didn’t add it all to the pot.  Still, there was too much onion, but that was my fault.  I added more bacon bits than called for because I like bacon.  And, I’ll add some more next time.  My hubby did throw in a bit more spices during the last 45 minutes.  I think it was some parsley and more basil.  I tasted both the before and after hubby’s tweaks and both were yummy.

Give this one a try! 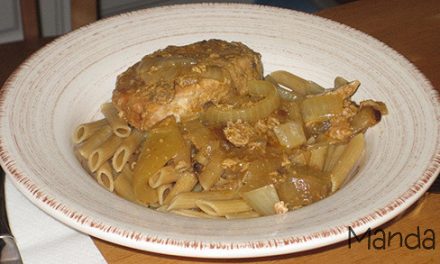