Okay, at our house we call it Bacon Wrapped Chicken, because that’s the key.  G LOVES and I mean LOVES bacon wrapped steak.  Who doesn’t, right?  Anyway, I found this recipe and thought that I had to give it a go to see if G would eat it.

I got the thumbs up!  I got the kid to eat chicken!  Whew!  Okay, there are other chicken meals that he will eat, you’ve already read some of them.  But, this one was quite a find.  He could smell it cooking and instead of us having to encourage him to give it a try, he was eager to try.

Our kid is a bacon-aholic.  He is a well known one.  At our church, if there’s bacon, the youth take it upon themselves to remind G that there’s a 2 piece of bacon rule.  Yeah, he has that sort of reputation.

Wrap 1 bacon slice around each chicken breast.   Heat large nonstick skillet on medium-high heat.  Add chicken; cover.  Cook 5 to 7 minutes on each side or until chicken is done (165 degrees).  Remove chicken from skillet; cover to keep warm.  Discard drippings in skillet.

Cook pasta in a large saucepan as directed on the package.  Meanwhile, cook cream cheese spread and broth in skillet until cream cheese is melted and sauce is thickened and well blended, stirring constantly with whisk.  Stir in tomatoes and onions; cook 2 minutes or until heated through, stirring occasionally.

I’ve only made this a few times, so there aren’t any modifications.  I find it tasty as written.  G doesn’t eat the pasta with sauce – no way – no sauce for that guy.  He gets plain old pasta with his bacon wrapped chicken and eats it up.

This is another one of those Kraft recipes.

Have a great weekend! 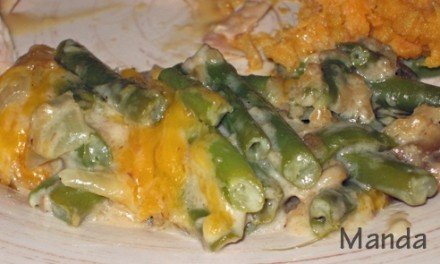